BEIJING, Sept. 19, 2021 /PRNewswire/ — The final 24 candidates in “The Media Challengers” campaign – a global campaign organized by CGTN – were officially announced on Friday. After repeated rounds of selection, 24 young people from all over the world were chosen from thousands of outstanding applicants from more than 130 countries and regions and advanced to the finals.

The final 24 candidates assembled in Beijing’s Shougang Park and the National Winter Training Center Ice Hockey Hall on Friday to prepare to set off for the cities of Xi’an, Wuhan, Shanghai or Yunnan, continuing to the final stage of the competition by participating in a reality TV show. 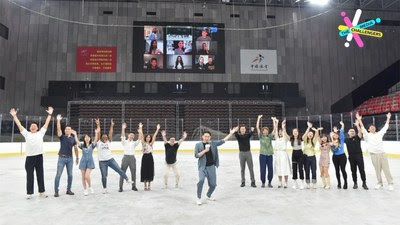 “The Media Challengers” campaign began on April 8, 2021, with the goal of gathering talented new media professionals worldwide and introduce new ideas into international communication in the context of media convergence.

The online “Like” vote-gathering activities also fully demonstrated the participants’ appeal to fans in the new media era. The 24 finalists were all chosen based on scores counted from a combination of professional selection and online likes. To advance to the next stage, the shortlisted contestants will now be challenged through a “reality show” where they will be required to complete a series of challenges. CGTN will air the selection process on film.

The event provides a platform for aspiring young journalists to display their talents and pursue their dreams while also allowing them to represent their generation’s voice in the world. It is also an opportunity for young media professionals to tell Chinese stories.

The global epidemic has not yet completely subsided. Considering the actual needs of epidemic prevention and control, overseas Media Challengers cannot come to China. However, this presents a fresh challenge as the new generation of journalists can fully demonstrate the power of technology. In the era of integrated media, multi-screen linkage, the pace of globalization will not stagnate due to time and space constraints.

The participants will also enter the CGTN global talent pool and obtain full-time or part-time job opportunities at CGTN Beijing headquarters or one of the three regional production centers in Washington, London and Nairobi. Through a demonstration of the power of media, these young hopefuls have the opportunity to open a new chapter of dialogue between young journalists from every corner of the globe.