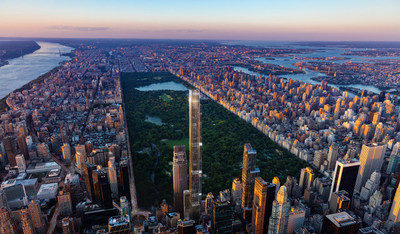 “Extell has an exceptionally strong reputation with the lending and institutional investor communities and this sophisticated transaction affirms the confidence in Manhattan’s luxury condominium market,” said Gary Barnett, President and Founder of Extell Development Company. “New York City has never known a supertall tower of this caliber and we are pleased to have our institutional partners on board to deliver a product that will be truly exceptional.”

Central Park Tower will be the definitive New York skyscraper with an incomparable offering in every respect. Situated on 57th Street with Central Park directly to the north, the tower is supremely located at the intersection of Columbus Circle and the Plaza District. Designed by renowned firm Adrian Smith + Gordon Gill Architecture, known for such celebrated supertalls around the world including Burj Khalifa in Dubai and the Kingdom Tower in Saudi Arabia, the building will include 179 ultra-luxury residences with gracious layouts, stratospheric views and access to New York’s most elevated private club of full-service amenities.

Central Park Tower will also be home to an approximately 300,000-square-foot Nordstrom department store. This new seven-story retail space will be the Seattle-based fashion retailer’s flagship location in New York City, the first in its over 100-year history.

Extell pioneered the development of ultra-luxury skyscraper development on what is now considered the most prestigious residential corridor in Manhattan with One57, the first supertall tower on Billionaires’ Row. The record-breaking glass tower overlooking Central Park, which redefined the New York City skyline, includes 132 premier condominiums above the Park Hyatt’s new five-star flagship hotel. One57 is home to the most expensive residence ever sold in New York City history at $100.5 million.

Extell Development Marketing Group will exclusively handle the sales and marketing for Central Park Tower with sales expected to launch in 2018 and completion slated for 2019. For sales information, please call 212-957-5557 or visit www.centralparktower.com.

Current projects under development include the largest condominium in Lower Manhattan, One Manhattan Square, located on the edge of the New York Harbor, offering breathtaking water and city views and over 100,000 square feet of amenities; The Kent at 200 East 95th Street, a building that pays homage to some of New York City’s Art Deco structures with interiors that echo the classic elegance of the Upper East Side; and 70 Charlton, the first luxury residential development located in Hudson Square, a section within West SoHo. Extell has also restored and updated a number of classics in landmark neighborhoods, including the former Stanhope Hotel at 995 Fifth Avenue and The Belnord, a landmark building on the Upper West Side.

SMI USA prides itself on integrity, professionalism and best-in-class assets. With the support of over 20,000 employees and decades of complex real estate planning and development, SMI seamlessly navigates projects from inception through disposition.

Unidentified attackers fired eight rockets at a Turkish military base in northern Iraq on Wednesday, two of which landed inside …
Read More
February 1, 2023 / General

Basra, Iraq, The Food and Agriculture Organization of the United Nations (FAO), in coordination with the Ministry of Environment (MoE), …
Read More
February 1, 2023 / General

Baghdad, The Ministry of Labour and Social Affairs announced on Wednesday (February 1), it will begin a far-reaching verification process …
Read More
February 1, 2023 / General