. Since its release into local markets across the globe, the Toshiba TV M550L has racked up plaudits for its display, sound, and system performance which make it a worthy digital-age choice for quality home entertainment. 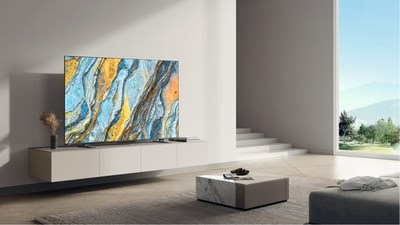 In line with Toshiba TV’s commitment to innovative technology, the M550L packs in a number of distinguishing features for the best value achievable within its cost range. Built into its display interface is the remarkable Fine Texture Restoration feature, which allows the Toshiba TV M550L to optimize images and upscale them to the best texture for a near-4K picture vividness. Restoring images on the go keeps them in optimal precision for the viewer’s relish.

Toshiba TV’s M550L is also an audio powerhouse, equipped with the REGZA Power Audio PRO and the acoustically refined Dolby Atmos. These features combine to produce the thrilling bass and finely-tuned, yet natural-sounding pitches that the M550L is acclaimed for without any inconsistencies. Dolby Atmos’ acoustics go a step further in redefining the soundscape that the Toshiba TV M550L creates, and brings the home cinema experience to higher immersive heights with the surround sound system.

The Toshiba TV M550L’s blazed surround sound system points up the flawless transmission of sounds through multiple output channels that surround the viewer and fill the room with the loudest, yet pristine sounds from their watched contents. Whether for games or movies, the M550L’s surround system is designed to deliver sounds with luxurious fidelity and mesmeric depths to complete the unforgettable viewing experience.